Clarksville Coaches Newcom and Hawkins to be Honored

Guy Newcom began Clarksville High School’s football program in the fall of 1962 and would go on to coach 17 seasons, leading The Generals through much success.

Under Newcom’s charge, The Generals won the Mid-Southern Conference almost every year. Unsurprisingly, at the time of his retirement, Newcom held the record for all-time winningest coach in Indiana and still maintains his hold in the Indiana Football Coaches’ Association, ranking at number 32 with 75.3 percent of games won. Newcom also started the Little Generals football program, which is also still in operation to this day.

Newcom retired in 1979 and passed the pigskin to Dennis Hawkins, who would coach the team for another 25 years. Under Hawkins, The Generals would have decades of continued success: two sectional championships, multiple MSC championships, and their only appearance in the state finals in 1997.

For their combined dedication to the Clarksville Community Schools football program, both Hawkins and Newcom will be recognized about 30 minutes before the Oct. 4 football game kickoff.

The football field will be named the “Guy Newcom Football Field” and the locker rooms the “Dennis Hawkins Facility”. 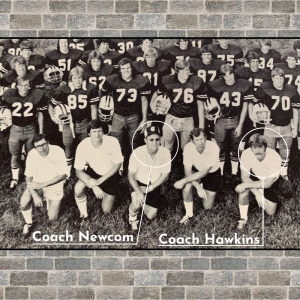