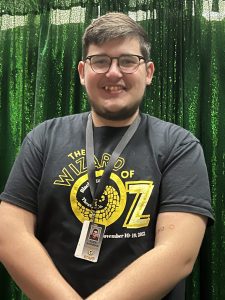 heatre Company has a new co-director for the November 2022 production of The Wizard of Oz: new CHS theatre teacher Alex Bowman.

Mr. Bowman is an Indianapolis native who moved to Clarksville from Goshen, Indiana. “The people (at Clarksville Schools) have been very welcoming,” says Bowman. “I have a lot of really supportive colleagues and that’s been very helpful.”

Bowman got into theatre when he was 13. He tagged along with a couple of friends who were auditioning for Shrek the Musical. After a little coaxing from Bowman’s choir teacher, he decided to give the audition a shot- and he got it! Bowman was cast as a 5’9″ elf. When his friends didn’t make the show, Bowman was nervous about not knowing anyone.  But after a few rehearsals that changed. “There was just some sense of community that grew among the kids that I couldn’t find that anywhere else,” he says.

Bowman had trouble picking a favorite play or musical. He says he loves the Phantom of the Opera, Jekyll and Hyde and Hadestown. What does he love most about teaching and performing in musical theatre? “It’s all of these people working together to create this one magical thing that will happen, and then it’s gone.”

You can see Bowman’s work on display in The Wizard of Oz, which debuts November 10th at Clarksville High School.