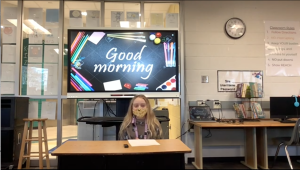 Technology teacher Brandi Money launched the newscast at the beginning of the 2021/2022 school year out of necessity. “Our PA system went down,” explained Money. Despite the equipment failure, school leaders needed a way to deliver the morning announcements. “They were waiting on a replacement part so I asked if we could use the Swivl to record a newscast,” says Money. Swivl is a robotic mount for an iPad that is designed to track and record videos of a moving person. “I only used two anchors,” Money recalls. The newscast was a hit and CES Assistant Principal Andrew Smith suggested they keep it going. 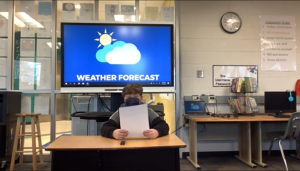 Since then, Money’s added several more students to Good Morning Clarksville. The crew is made up of 4th grade students, who each applied for their positions. There are still two anchors plus a weather person, two sports reporters, a critic and a field reporter. Behind the scenes, you’ll find a floor director, producer and editor. The students are responsible for writing their own scripts and there is no TelePrompter to rely on. Scripts are printed out and read from the set- a student desk arranged in front of a SmartBoard. The floor crew switches between various backgrounds on the SmartBoard that match what the talent is discussing- whether that be sports or weather.

The plan is to get the newscast students together each Thursday to record a new episode. However, staffing shortages from COVID have made that challenging in January. As technology teacher, Money is often pulled to sub for another teacher who has called out. The “Good Morning Clarksville” crew recorded their first episode of 2022 on February 11th. Students are pulled out of their normal classrooms for a 30-minute taping. Money says being part of the newscast provides an extra incentive for the students to be on their best behavior. “I think it encourages kids to do well in class because they know they have to do well or I won’t allow them on the newscast.” 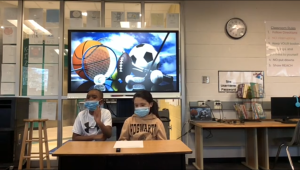 The newscast is an opportunity for students to sharpen their writing, communication and public speaking skills. Episodes are recorded on Thursdays and sent to all Clarksville Elementary teachers on Friday, to share with their classrooms. Even though Good Morning Clarksville began as a workaround for a technical issue, Money plans to continue the student newscast in the future. “I’ve noticed a lot of people coming out of their shells when they do the newscast, who normally would be very quiet,” says Money. I think it’s a good thing for them.”