After learning about how video games are created this week, 5th graders at Clarksville Middle School had the opportunity to take their learning to the next level and speak with a working video game designer from Red Storm Entertainment, a division of Ubisoft, a video game development company with studios across the globe. 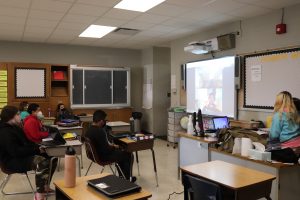 Matt Wagner, son of Clarksville Schools teacher Janet Wagner, spoke with students via video chat over the course of three days. Matt has worked in the industry for a decade, first as a sound designer and later as a game designer. He’s worked on big-name games including Far Cry 4, Ghost Recon, The Division, The Division 2, Assassin’s Creed, and, currently, a virtual reality game based in the Star Trek franchise. 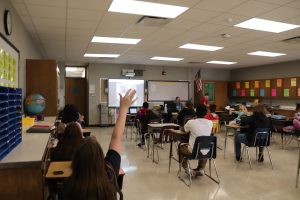 Students had the opportunity to ask Matt about his career path and the inner workings of the video game industry. Questions included “what’s the difference between AR and VR?” (answer: augmented reality games upon reality, virtual reality creates a whole new one), “What’s the first step in making a game?” (answer: finding a concept that you want to make and someone would buy, followed by plenty of teamwork and collaboration) and “What’s the longest you’ve worked on a game?” (answer: two years).